Rolling the Favorite Family Film feature out of mothballs today to bring you a classic movie to start your summer out right. This movie is based on the book The Scarlet Pimpernel by Baroness Orzcy, and it is one of those rare instances where I honestly couldn’t tell you whether I enjoy the book or the movie more.

There have been a few versions of this movie done, but my favorite, and the one I’m recommending here today, is the 1982 version with Jane Seymour, Anthony Adams, and a VERY YOUNG Ian McKellan. 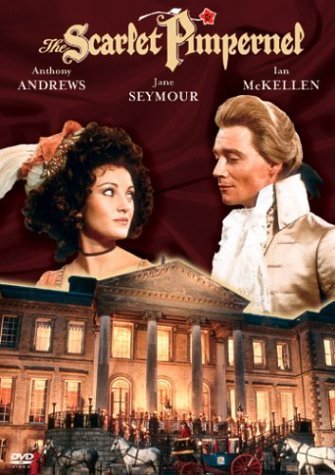 This movie takes place in France and England, circa 1793 during the French Revolution. (This is not to be confused with the later revolution portrayed in Les Miserables… that particular rebellion took place in 1832 and the battle lasted all of 24 hours).

This movie, like so many of my favorites, has it all. Witty banter, epic heroes, a truly sinister villain, intrigue, and through it all one of the most beautiful romances ever.

Meet Sir Percival Blakeney, an English lord and ridiculous buffoon. He often visits his noble friends in Paris and enjoys all the usual sort of amusements: dinner parties, shows at the theater, hunting, poetry… but when he sees Margeurite St. Just on stage, he falls head over heels in love. He sweeps her off her feet and she eventually agrees to marry him, leaving France for his holdings in England.

Through it all runs an undercurrent of tension in their world. In Paris, it is not safe to be part of a noble line, for the Revolution is in full swing, and all noblemen and women are considered to be the Enemy, whether or not they truly have done anything wrong.

But there is a man working behind the scenes, striving to make the world a better place by rescuing innocent people from the mercilessness of the Guillotine… nobody knows his true name or face… for he is a master of disguise and cunning, but he has saved countless lives and continues to work tirelessly. He is the one known as The Scarlet Pimpernel!

Working against the Scarlet Pimpernel is Citizen Chauvelin, head of state security. Chauvelin is only concerned with his own advancement, the purity of his cause, and he harbors a desire for Marguerite St. Just, a desire that is frustrated by her marriage to Sir Blakeney – which makes him angry and causes him to threaten her brother’s safety.

When the young Dauphin’s life is at stake, the Scarlet Pimpernel will set out on his most daring rescue yet. Can he outwit the forces working against him a final time?

If you enjoy movies like The Princess Bride, or period pieces like North and South or Pride and Prejudice, or you love movies featuring heroes like Batman (The Scarlet Pimpernel was the story that Batman draws his origins from), you will love this movie. It’s older, but it has held up against the test of time. The acting is fantastic, the script is well-written and entertaining, and the cinematography does not feel overly cheesy or low-budget. Trust me, this is a great one!

You can watch this one via Amazon with a free trial of something called Acorn. You can also rent it online at places like Youtube, Google Play, and iTunes.

Have you seen this movie? What did you think of it? Do you have any favorite family films you’d like to recommend like this one?

If you’d like some more recommendations from this feature, check out the Favorite Family Films category (under Reviews/Movie Reviews), or just CLICK HERE

“Your friend, he is in distress, to the rescue!”

This is a great movie that we pull out often to watch on those nights we can’t find anything else to watch.

Sir Percy: Let that be a lesson to you, sir. Never take anyone for granted.

I love this movie so much! So many great quotes!

If you like Princess Bride, Pride and Prejudice, and Batman I’ll like this movie? I guess I’ll have to check it out then!

It is old and perhaps “cheesy” but my more-critical-of-films-than-me (nice way of saying “film snobs”) friends have all by and large liked this one, so I feel confident in recommending it.