An extra post for you today because I just had a brilliant idea… mostly because I just saw this little fun thing and thought it was awesome and decided to make it part of the Fantasy Month celebration! 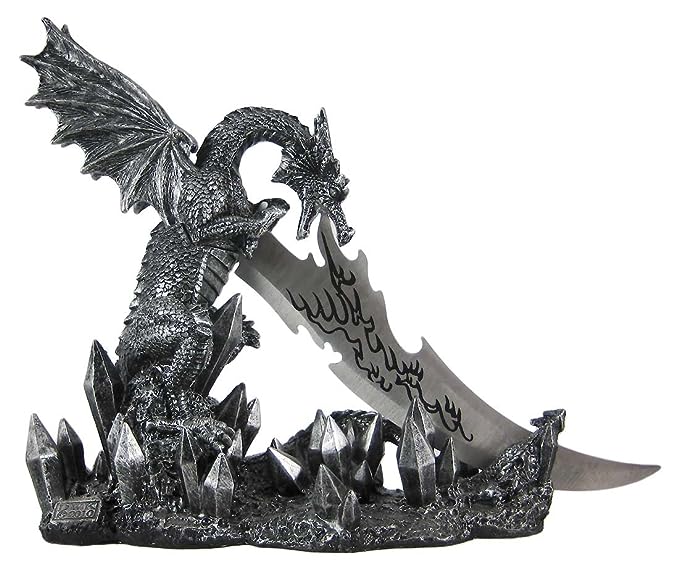 Isn’t that super cool? It’s a letter-opener… and it’s a dragon!

So here’s the deal. I’m making this into a February is Fantasy Month Giveaway! Whoever leaves the MOST COMMENTS on the tour blog posts over the course of the month will win this little guy!

(US entries only, unfortunately… some countries have some weird restrictions about allowing me to send my postage-carrying dragons across their borders carrying things that could be considered “weapons”)

Any blog post on the tour is fair game, and I’ll give you until March 3 to get your comments in! In the case of a tie… I’ll pull names from a hat!

Ooooh. I love this and I want it. How long’s the blade? It looks like it might be short enough that I could get way with having it at college . . .

Says it’s 8 inches. Not sharp, it’s a letter-opener not a dagger… but it LOOKS like a dagger, so it’s cool LOL

Ahhhhh. That’s probably all right, then. Some letter openers are sharp, though, so I thought I’d ask.

Yeah, the reviews say this one isn’t very sharp and can’t really be sharpened, though it’s kinda wicked looking.

Got it. So it’ll look cool on my desk and maybe make a decent addition to a fantasy costume for my dorm’s Halloween event, but it won’t get me in trouble with my RA. Fabulous.

That would fit right in with my letter opener collection…

[…] There’s also a GIVEAWAY happening for the person who makes the most comments on the blogs in this month’s tour!   You know you want a dragon letter opener!!!!  Check out the Giveaway details here! […]

[…] THERE WILL BE AN EPIC FANTASY PRIZE FOR THE MOST COMMENTS left across the Blog Tour posts. CLICK HERE for more details! […]

That thing is sooo cool.

I thought it was pretty fabulous!

He is very cute, and he does look a bit weaponish

Hehe, yeah he does.

‘Twas an Evening in Bethlehem

'Twas an Evening in Bethlehem