I apologize for not posting this last week. I had promised, and then last week turned into one of those weeks where suddenly it’s Saturday and you’re still trying to figure out where Wednesday went!

Today’s favorite family film is another movie that didn’t get nearly the hubbub it deserved. Reign of Fire is, in my humble estimation, the best dragon movie of all time. It did for film-dragons what Jurassic Park did for film-dinosaurs, what Lord of the Rings did for the fantasy genre on the big screen. It was iconic and brought dragons to the big screen in a wholly new and non-cheesy way.

And yet, most people don’t even know it exists. 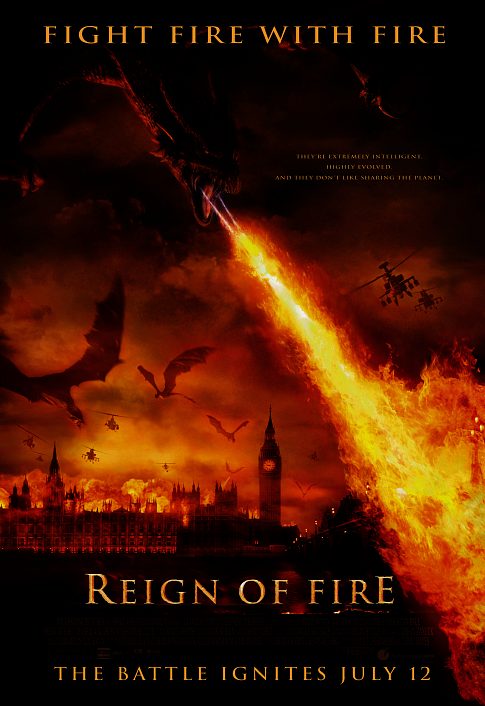 True to form, the first time I saw this movie in the theater, I missed the first 15-20 minutes. (This was a regular occurrence growing up in a family that hated sitting through previews for movies we weren’t interested in).

However, even without the first few scenes, this movie became and instant favorite… which, of course, meant we had to go see it again to find out how it started!

Set on Earth, this movie begins in a fairly typical London. A young boy is visiting his mother’s workplace (excavating a tunnel of some kind) when all of a sudden a fire-breathing monster emerges and kills everyone.

Fast-forward 20 years and the world has been overrun by dragons. Humanity is nearing extinction as these fell beasts are practically un-killable. The few people who remain have no idea whether or not they are the last ones left. Meet Quinn (Christian Bale), the leader of one of these small communities of humanity that remains. His only priority is to keep his people safe. They live in fear, but they live, and to Quinn, that is perhaps the very best they can hope for.

However, they soon find out they are not alone, as Van Zan (Matthew McConaughey) arrives in his tank, along with his compatriots. This is Matthew McConaughey like you’ve never seen him before, and is my absolute favorite role I’ve ever seen him in. I didn’t even recognize him the first time I saw the movie. Van Zan has discovered a way to bring these creatures down, and even has a plan for hurting the dragons at their very core so as to give humanity a fighting chance to retake their planet. Van Zan is not okay with simply surviving, he wants more than that for humanity. Quinn is not sold on his plan, believing him to be either far too optimistic, reckless, crazy, or a combination of all three. Quinn worries that Van Zan will get his people killed, and the two clash over the right course of action.

This movie also has some fantastic secondary characters, including Creedy (played by Gerard Butler), Quinn’s best friend and right-hand man, and Jared, a young orphan that Quinn has taken in and raised as his own. Van Zan’s crew is quiet, determined, and likable, as well.

It’s not all serious and dark, however, this movie has plenty of light-hearted moments… including, but not limited to: banter between Quinn and Creedy, a re-enactment of The Empire Strikes Back, and witty repartee between Quinn and Van Zan.

If you love dragons… this is the movie for you. But be warned: these are not gentle, sentient dragons that sound like James Bond. These are cunning, fell beasts who care about humanity only as much as a lion cares about a wounded gazelle.

Seriously, if you haven’t seen this movie… go find a copy and watch it immediately! Despite the overarching storyline of humans vs. dragons, it doesn’t have anywhere near the graphic violence of Jurassic Park.

Reign of Fire is available to watch for free through Cinemax with an Amazon Prime membership (if you start a free 7-day trial of Cinemax and then cancel that subscription before the week is up). It is also available to rent through iTunes and other online rentals. Or you can flat-out buy the blu-ray for $7.52 on amazon right now. Seriously, it’s that good… you’ll want to own this one!

I saw this one a long time ago and somehow it didn’t resonate with me the way it did with you. It felt mostly like a survivor movie, like Mad Max or Cloverfield (with a better ending). I never really felt like the main characters were heroes so much as just survivors. There was a lot of adrenaline yes, but not really much genuine nobility. Maybe I just missed it. It has been a long time since I watched it.

I do agree that Matthew McConaughey is brilliant in this one and for me he stole the show. But it just wasn’t enough to win me over.

This blog series is such a great idea, though. I’m so glad you’re going back through all the old movies and picking out great ones people might have missed. I definitely plan on watching Bridge to Terabithia once I read the book.

I find it entertaining how we can have similar tastes in books and such vastly different tastes in movies!

The heroism in this movie is not the obvious Aragorn-riding-to-the-Black-Gate or Frodo-Trodging-Toward-Mount-Doom type. Quinn’s heroism is quiet… he’s not taking the fight to the dragons, but that’s because he doesn’t believe they can be defeated. When Van Zan appears, Quinn is skeptical about his stories of having killed even one dragon. He’s rebelliously keeping himself and a community alive. Van Zan is the opposite: seemingly brash and arrogant, like Eowyn brandishing her puny sword in defiance of the Witch-King. Two sides of the same coin: both protecting, just choosing different ways to do so.

Glad you’re enjoying the series! I have tons more… LOL

I will be very interested to hear what you think of Bridge to Terabithia.

Was this movie on Netflix a while back? I seem to remember seeing the cover/title somewhere… Or maybe I read another blog post about it.
Anyway, what a lot of big names! I like Christian Bale, Matthew McHowdoyouspellhisname, and Gerard Butler. Oh, and I like dragons, too :P. I’ll have to check this one out sometime! By the way, I love that you let us know where we can find these movies!

I believe it was on Netflix at some point.

Hahah, I had to look up Matthew Mc….’s name multiple times while writing this post. Which was more than once because I started writing and then trashed my original write-up… and couldn’t remember how to spell his name, so had to look it up again. LOL

I’m glad people are enjoying this series! I am enjoying revisiting old favorites and talking about them!

DRAGONS. I’m kind of a sucker for dragons.

And normally, I don’t particularly like Matthew McConaughey, but it sounds like he’s absolutely GREAT in his role in this movie! I might have to consider watching this one! ^_^

It’s a great one. And Matthew McConaughey is brilliant in this movie. And I’m kind of a sucker for Christian Bale and Gerard Butler… so there’s that…

[…] I haven’t done a whole post on, but have definitely mentioned several times), Stardust, Reign of Fire, Ella Enchanted, The Princess Bride, Bridge to Terabithia, and Ladyhawke - which are by far my […]