The 6th Annual Tolkien Blog party has started just as the Silmaril Awards are wrapping up! Today, I am participating in the blog tag for the party! 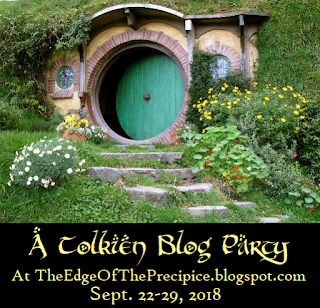 Starting off with a hard one right out of the gate! Ooooh…. how to choose? Honestly, Two Towers has always been my favorite. It is the book I’ve read the most often, and when I was younger, sometimes I’d just sit down to read that one all by itself. I know that’s probably weird. A lot of people don’t like Two Towers because of the endless pages of Sam and Frodo plodding across Mordor… but, in the words of Bastian from “Neverending Story” “But that’s what I like about it!” I dunno, I found their one-foot-in-front-of-the-other struggle so much more relatable and compelling than the flashier heroics of other parts of the series. And then there was Helm’s Deep and everything about Rohan… and I was a rather horse-crazy kid, so Rohan and the Horse Lords have always had a special place in my heart. Some may desire the quiet of the Shire, or the peace of Rivendell, or the magic of Lothlorien… but me… I left my heart in Rohan. With Eomer.

2.  Do you have a favorite subplot?

Oh, goodness, yes! I mean, how to choose? But seriously, my favorite subplots have always been the parallel stories of Merry and Pippin when they split up at Rohan. The way that they each “grow up” and see the sober realities of the world on their own is beautiful to behold, and I always enjoyed the way that Merry and Pippin had somewhat reversed experiences with greatness. Merry forms a deep bond with Theoden after Gandalf casts out Wormtongue and heals the king from the poisonous lies he’s been believing and then he gets to see the king return to a measure of greatness. Meanwhile, Pippin grows close to Denethor, the master of the mighty city of Gondor, who seems to have it all held together, but then witnesses his descent into madness due to the same kind of lies, and sadly, Denethor clings to those lies too tightly and allows them to destroy him.

3.  What’s your favorite theme in Tolkien’s books?  (Can be in one specific story, or overall.)

Hm… probably the theme of friendship and loyalty that runs throughout the entire Lord of the Rings. It is such a strong theme, and I love it.
4.  Do you have a favorite weapon from Middle-earth?

This tag is evil and cruel, making me choose these sorts of things. I guess I’ve always been a bit partial to Glamdring/Foe-Hammer!
5.  Would you like to be a hobbit?

I’d rather be a Horse Lord of Rohan. Or an elf. But if Hobbit was the only option on the table, then yes. I would like to be a hobbit. But I’d be a disreputable specimen of a hobbit and go haring off on an adventure with the first wizard to stop by!
6.  Do you have a favorite romance/couple?

Eowyn and Faramir, for sure! I even wrote a whole blog post about them this past February for Valentine’s Day!
7.  What’s your favorite Middle-earth creature?  (Can be “real” or “imaginary.”)

SMAUG! Dragons are my favorite forever. Even evil, villainous dragons. And Smaug is the ultimate standard for those!
8.  What character do you look the most like?

I took a personality quiz and it told me I was 100% most like Tom Bombadill… so that was weird. Thankfully it also said I had 0% in common with Grima Wormtongue (#WellTHATSaRelief!)

And, I mean… I’m a LITTLE concerned that it thinks I have so much in common with Saruman and Sauron… more than with Bilbo, even… but… I mean… #yikes?

If you want to try it (or, you know, procrastinate from something more worthwhile…) I found this particular test HERE.
9.  Are there any books about Middle-earth or Professor Tolkien (but not written by him) you recommend?

I… am pretty sure I’ve never read any books about Middle-Earth or Professor Tolkien that he didn’t write… so I’ve got nothing. I did direct the play The Hobbit and we used the script by Patricia Gray. I liked that one, but didn’t like how she decided to cut Thorin’s death scene from the end… as I find that kind of crucial to the plot and character development of Bilbo.
10.  List up to ten of your favorite lines/quotations from the Middle-earth books and/or movies.

Just a few of my favorites… and I’m being a REBEL and sharing MORE than ten! So there!

“All that is gold does not glitter, not all those who wander are lost; the old that is strong does not wither, deep roots are not reached by the frost.”

“Faithless is he who says farewell when the road darkens.”

“Many that live deserve death. And some that die deserve life. Can you give it to them? Then do not be too eager to deal out death in judgment. For even the very wise cannot see all ends.”

“If more of us valued food and cheer and song above hoarded gold, it would be a merrier world.:

“May the wind under your wings bear you where the sun sails and the moon walks.”

“Then something Tookish woke up inside him, and he wished to go and see the great mountains, and hear the pine-trees and the waterfalls, and explore the caves, and wear a sword instead of a walking-stick.”

“It’s a dangerous business, Frodo, going out your door…You step into the Road, and if you don’t keep your feet, there is no knowing where you might be swept off to.”

“Yet such is oft the course of deeds that move the wheels of the world: small hands do them because they must, while the eyes of the great are elsewhere.”

“’What do you fear, lady?’ he asked. ‘A cage,’ she said, ‘To stay behind bars, until use and old age accept them, and all chance of doing great deeds is gone beyond recall or desire.”

“Far over the Misty Mountains cold, through dungeons deep and caverns old, we must away ere break of day, to seek our long-forgotten gold.”

“Let this be the hour when we draw swords together. Fell deeds awake. Now for wrath, now for ruin, and the red dawn. Forth, Eorlingas!”

“There’s some good in this world, Mr. Frodo… and it’s worth fighting for.”

“Death is just another path, one that we all must take. The grey rain-curtain of this world rolls back, and all turns to silver glass, and then you see it . . . White shores, and beyond, a far green country under a swift sunrise.”

Great observation about Merry and Pippin! For the first question, I don’t see why you couldn’t count LotR as a whole as one book.

Hehe… well… I mean… Tolkien actually wrote them as 6 books… so purists are already upset that they get lumped into a trilogy… I would not bring their wrath down upon my head…. also, it’s fun sometimes to think, “Hm… if I HAD to choose…?”

I used to be really bored by the “Frodo and Sam wandering through Mordor” parts of TTT and ROTK, but the last time I read them, they passed super quickly and I enjoyed them much more. Maybe I’m aging into them?

If my heart didn’t belong to Boromir and Bard, it would belong to Eomer. I love Rohan best of all the Middle-earth lands.

Anyway, how cool you directed a play based on The Hobbit!

As for sharing more than 10 lines… the tag is more like guidelines, actually

So glad you could join the party!

Haha I’m sure I could have come up with more than 10 favorite quotes too, but I didn’t want to spend too much time on it.

re. “Faithless is he who says farewell when the road darkens.”

I didn’t have it on my list, but that whole exchange is great. It’s Gimli’s reply to Elrond when Elrond tells the Fellowship that they won’t be asked to swear to complete the quest.

“Faithless is he that says farewell when the road darkens,’ said Gimli. ‘Maybe,’ said Elrond, ‘but let him not vow to walk in the dark, who has not seen the nightfall.’ ‘Yet sworn word may strengthen quaking heart,’ said Gimli. ‘Or break it,’ said Elrond.”

Another favorite I forgot to put in is when Gandalf is talking to Saruman and S reveals his change of heart… and (I’m not looking up the exact wording here, so paraphrasing slightly) tells him, “Now I’m Sarumon of many colors!” and Gandalf just sort of drily replies, “I liked white better.” (I really wished they’d put that in the movie)

I also love Aragorn’s somewhat laughing rejoinder to Samwise when he tells him he thinks an agent of the Dark Lord would “look fairer and feel fouler,” “Meaning I look foul but feel fair?” They put half of it in the extended edition, but I wish they’d retained the second part and given Aragorn back his sense of humor. If the movies lacked one thing, it was Tolkien’s dry sense of humor he imparted to his characters…. Aragorn, for example, was never so gloomy/Batman-esque-broody in the books!

Ah, Boromir!!! I love him to pieces. (I just wouldn’t prefer to live in Minis Tirith… personally).

That is funny, but yeah, I guess themes are just easier for me to pick a favorite. Though the subplots one gave me some pause for a bit… but really, the Merry/Pippin subplots have always been one of my favorites.

The play was SO MUCH FUN! We built a huge dragon and got it to “breathe smoke” even, which was cool. The students did a fabulous job with the whole thing.

Hehehe, I figured it wouldn’t get me kicked out of the tag if I shared more than 10 lines

Merry and Pippin could possibly be my most favorite side characters. I love their journey, how they both mature a bit, but still keep their personalities…such great arcs. <3

Yes! Merry and Pippin are marvelous. Their journey may not be as harrowing as Frodo and Sam’s… but they definitely have the widest range of adventures!